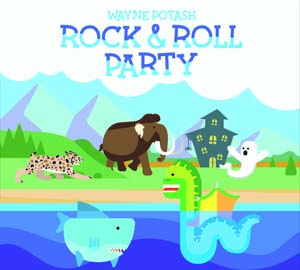 Posted at 15:58h in Guest Blogger by skybonnie 0 Comments

(North Easton, MA – March 2017)  You’re invited to a rock and roll bash like no other.  If you think only people rock out, you have a surprise coming – bobcats, a woolly mammoth, a sea monster and even a shy shark get down and get funky with Wayne Potash on his latest CD, Rock & Roll Party, which boogies out on March 31.

Rock & Roll Party features 16 rock and roll songs that encourage kids to move and groove.  Wayne has been singing these songs in classrooms and concerts for years, so they are all kid-tested.  In addition to ten original songs – many of them co-written with groups of children – there are fit-for-families versions of songs by Aerosmith, The Who, George Thorogood and John Lee Hooker.  Producer Safety Mouse enlisted several professional Boston-area rock musicians to make sure the songs really rock out – and they do!

Rock & Roll Party showcases Wayne’s particular talent: making great rock and roll that is accessible for kids, from the younger set to older kids who enjoy great grooves.  Pop goes the diamond as the CD opens “At the Baseball Game.”  Grab the nearest ghost and twist the night away to the rockabilly beat of “Haunted House Party.”  Several rock classics get the kid-friendly treatment while remaining true to their adult-version originals: Parents familiar with the George Thorogood & the Destroyers ode to misbehavior, “Bad to the Bone,” will laugh out loud at the clever kid-treatment given to the lyrics; “Boom Boom,” “Train Kept A Rollin’,” “Boris the Spider” and “Daddy Is a Rock and Roll Star” also sport smart, relatable new words.

The production is well-paced, varying high energy tunes (the clap-and-snap along “Sweet Tooth”) with mellower offerings (the haunting “Don’t Say Anything,” a reminder of what mom always said about if you don’t have anything nice to say…), making the overall atmosphere of the album that much more ear-catching and enjoyable.  Wayne wisely turns the lead vocals over to Hannah Lizotte on “I’m a Little Princess” – sounding every bit the princess with empowered attitude: “I can be a doctor, I can drive a big truck too.  Because being a princess isn’t the only thing I can do.”

“This album is a convergence of two things I love, music for kids and rock and roll.  Kids at my music programs request these songs over and over again,” says Wayne.  “We’ve enlisted some of the best rock musicians that I’ve ever worked with on this recording.  It’s a rock and roll album that kids and grownups can enjoy.”

Wayne, a Berklee College of Music alum, provides music and movement programs for 15 Boston-area schools as well as performing solo and band concerts at a wide variety of venues.